Elkhosht in Cairo University Cultural Salon: ،Education Develops by Changing Exams and Problem-Solving Questions are to be incorporated into Second Term Exams, 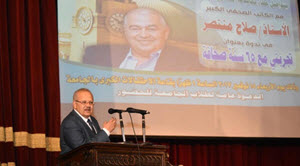 Salah Montasser: ،Contemporary War seeks Mind Occupation .. Information Veracity should be ascertained to ensure the Credibility of Writer or Journalist,

Elkhosht said that the document is to be translated including Cairo University work, study curriculum, teaching methods, exams, and cultural mobility. Elkhosht indicates the importance of meeting to guarantee the culture of generations dialog and the acceptance of multiplicity and disagreement as civilized manifestation which expertise and experiments are based on.

Elkhosht said that ،،Students should have multiple resources of information and science.,, He pointed out that ،،Truth is relatively reached by exchanged effort and continuing dialog.,, He added that ،،Education change should begin with exams change.,, Elkhosht said that ،،Cairo University started with changing exams system by bubble sheet. It seeks adding problem-solving questions to bubble sheet method to help students think by finding probable right solutions.,, He stressed that ،،Model answers are the most dangerous assessment methods in education.

Senior Journalist Salah Montasser said in his dialog in the cultural salon with students and professors that ،،Grand Celebration Hall at Cairo University is steeped in intellectual, artistic, and literary history.,, He indicated the importance of dialog exchanged between the elderly and youth who will plan for the future. Montasser added that ،،When human contemplates in history, he or she will find that history is divided into groups of decisions; whether predetermined with which he or she has nothing to do, or made for purpose, or by coincidence, and represents a way for individual success in life.,, He indicated the importance of reading because it changes and develops the way of thought and represents the way of individual success. Montasser illustrates that ،،It has become very easy to get information through websites.,

Montasser pointed out during his dialog at cultural salon that ،،It is important to learn by meditation.,, He illustrated that ،،Leaders of journalism did not study media but they had passion for journalistic work which they struggled for.,, He said that ،،The writer who influenced him the most is Ibrahim El-Wardany whom writings are characterized by the element of suspense.,, He pointed out that ،،The future is bright for digital journalism.

Salah Montasser said that ،،War now is embodied in mind occupation instead of land occupation.,, He pointed out that ،، Terrorism creeps into human mind and incites it to believe in specific ideology, beliefs and orientations.,, He calls for converting science to a mean of knowledge. He added that ،،Faculties of Mass Communication should be concerned with the future perspective and Arabic language as well as ascertain the veracity of information which ensure the credibility of writer or journalist.,,