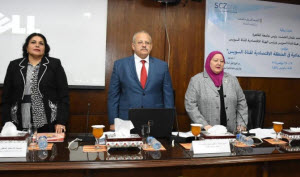 Faculty of Economics and Political Science at Cairo University (FEPS – CU) organizes a conference on economic and social development in the Suez Canal Economic Zone (SCZone). The conference is inaugurated by Cairo University President Mohamed Osman Elkhosht and attended by Acting Dean of FEPS Magda Saleh, Head of the Suez Canal Regional Development Project Research Group and Professor of FEPS Heba Nassar, and group of public figures and economists.

Elkhosht said in opening speech that the conference is important especially that it is directly related to the interest of Cairo University vision regarding transformation into third-generation university. Cairo University is aimed to become a third-generation university that mainly relies on employing science, education, scientific research and knowledge in community service, state sustainable development and economic advancement. He pointed out that advancement ethics are related to the necessary change of behavioral economics. He said that uplifting Egypt is associated with economy development and conducting effective economic projects for state and society.

Acting Dean of FEPS Magda Saleh said that the most important goal of ،Sustainable Development Strategy: Egypt Vision 2030, is establishing ambitious prosperous development track for Egypt by benefitting from competitive fundamentals and advantages of Egyptian economy. This goal is to be pursued by achieving economic growth balanced geographically, sectorally, and environmentally, and achieving inclusive growth which synchronizes with achieving the social justice goals to positively influence all society categories. She pointed out that Suez Canal is an international waterway that enjoys economic, political, and military importance.

The conference sessions are earlier initiated by a minute of silence in mourning for the martyrs of Rawda Mosque in Arish.