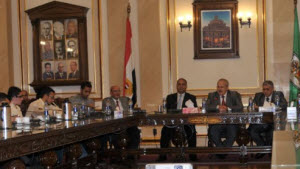 Cairo University organizes a seminar as one of its cultural salon activities on Tuesday with the journalist Mohamed Amin. The seminar is entitled ،Spokesperson and Role of Information in Confronting Rumors.,

Cairo University President Mohamed Osman Elkhosht said that the individuals of mature communities have the ability to distinguish between facts and rumors in contrast to immature communities in which rumors are increasingly spread especially during times of crisis.

Cairo University President added that rumors are spread in topics of concern to individuals. Such topics are distinguished with importance and mystery. The environment of the community and its inclination to spreading rumors are not to be disregarded.

Elkhosht pointed out that there are many strategies used for combating rumors through information. He added that many rumors have no bases which can be considered psychological warfare that is waged by someone against another, an authority against another or a state against another state.

Elkhosht touched upon methods of terminating rumors including developing rational critical thinking which Cairo University staff is working on.

Journalist Mohamed Amin stressed the importance of discussing ideas and suggesting them and verifying information that are presented to people to develop ourselves, uplift society, and overcome rumors that are spread in periods of revolutions and crises. Spreading rumors is done in the light of psychological preparation of people to accept rumors as happened in Egypt during January 25 Revolution by talking about Gamal Mubarak succession plan. Mohamed Amin touched upon information as the strongest weapon in confronting rumors.

Mohamed Amin added that rumor dies in enlightened environment especially in the light of telecommunication revolution and the existence of huge number of news sites and social media sites. He pointed out that rumors are aimed to attack a person, a place, an institution, or a state. The rumor can be religious, political, or economic, and is used in psychological warfare and cold war.

Amin referred to the role of spokesperson in providing information and making a proactive effort to avoid rumors. He illustrated that the competence of spokespersons in performing their roles depends on their personalities and the environments they work in.

Amin pointed out that mass communication is a service and a mission. Media professionals are representatives of society whom role is represented in facts presentation to serve country and help keeping the spirits of citizens up. He urges media institutions not to follow specific orientations so that not to lose their professionality and credibility.

The meeting is attended by the Cultural Advisor for Cairo University President Abdullah Eltatawy, students, and some faculty members.