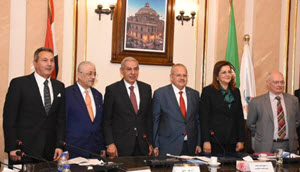 Cairo University and Ministry of Planning, Monitoring and Administrative Reform (MPMAR) sign cooperation protocol for entrepreneurship at the levels of schools and universities, and launching pioneers initiative 2030. The protocol is also aimed at carrying out the professional Master’s Program for Entrepreneurship at Faculty of Economics and Political Science Cairo University in cooperation with Cambridge University. The protocol signature is attended by Minister of Higher Education and Scientific Research Khaled Abdelghaffar, Minister of MPMAR Hala Al-Said, Minister of Education Tarek Shawki, Minister of Trade and Industry Tareq Qabil, Cairo University President Mohamed Osman Elkhosht, and Bank Misr President Mohamed Eletribi.

Cairo University President said that Entrepreneurship Professional Master’s Protocol is crucial for graduating cadres able to transfer ideas and operationalize them to achieve development and progress for society and contribute to inclusive development. This reflects Cairo University heading for transformation into a third-generation university that graduates entrepreneurs not employees and shows concern with research and links it to inclusive development, employment, and knowledge utilization for uplifting society.

Cairo University President said that it is important to work in one team on transference into a new era for the state; a stage that initially begins by changing ideas system then knowing the means necessary for carrying out this change and applying it to real world. The University President referred to the importance of working on local manufacturing and creating local alternatives of Egypt’s imports. He pointed out that Cairo University works in cooperation with Ministry of Trade and Industry to operationalize entrepreneurs thought.

Elkhosht pointed out that Cairo University is about to establish a center for research marketing. This idea emerged because there is no article in Universities Organization Law according the right to establish companies and institutions like abroad states. He added that Minister of Higher Education and Scientific Research Khaled Abdelghaffar brings glad tidings of finishing the largest stage of legislative amendment for this law.

Cairo University President proceeded: ،We dream of developing entrepreneurship curricula for all faculty students to raise their awareness.,

Minister of MPMAR Hala Al-Said said that entrepreneurship initiative and pioneers 2030 are launched through Egypt’s Vision 2030 for a balanced economy that depends on knowledge and participation between government, and private and civil sectors. She referred to the importance of prioritizing youth in the Egyptian state.

The minister referred to the importance of supporting Small and Medium-Sized Enterprises (SMEs) and qualifying a generation of youth seeking job creation and project undertaking.

Minister of Higher Education Khaled Abdelghaffar said that a convention is signed with the American University in Cairo (AUC) to establish career rehabilitation centers at universities for post-graduation. He proceeded: "Youth should be creators of job opportunities not waiting for job because no state can employ this huge number of students but Small and Medium-Sized Enterprises (SMEs) are the solution.”

Abdelghaffar added that this protocol represents a hope for Egypt and help in disseminating free thought and entrepreneurship. He pointed out that steps have begun to establish business incubators inside each university.

Minister of Education Tarek Shawki enunciates that the Egyptian state looks forward to graduating youth able to compete in labor market and create a society having the ability to innovate and conduct entrepreneurship.