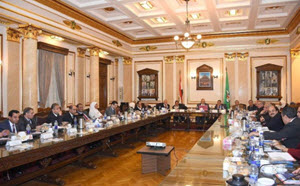 Cairo University Senate, headed by Cairo University President Mohamed Osman Elkhosht, discusses first term exams progress at faculties in its meeting on Thursday, December 28, 2017. The senate urges faculty deans and vice-deans to follow up exams progress and solve any problem that may occur during exams. It also orders providing all means of comfort to students at exam halls to perform their exams as well as urges starting works of correction and controls immediately after finishing the exam of every subject. Student answer sheets should be quickly circulated among professors and be corrected and revised. The accuracy of monitoring student scores should be assured.

The senate decides allowing students who did not pay study fees to enter exams provided that they pay in the second term. It also decides studying cases that cannot pay to help them.

Cairo University President Mohamed Osman Elkhosht said that all the arrangements of exams security are made; exam halls are secured by administrative security personnel, and exam sheets are printed out on the same day of examination. Examiners are prevented from circulating exams through devices connected to internet to keep their secrecy, and examiners should be attending at exam time. Student results should be announced quickly.

Cairo University President pointed out that first term exams started at faculties and are progressing according to a disciplined system including preventing the usage of mobile phones at exams hall. No abuses or incidents that may affect exam works have taken place until now.