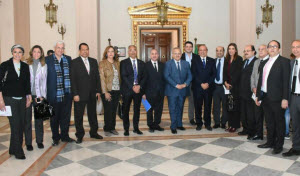 Elkhosht added during the press conference held at Ahmed Lotfy Elsayed Hall at Cairo University dome on Thursday that Cairo University started forming a committee for managing hospitals development project having multiple committees. The committees include administrative censorship, Faculty of Law committee, the State Council, Ministry of Investment and International Cooperation, and Faculty of Archaeology Dean being Kasr Ainy considered a monumental hospital.

Elkhosht said that the next step is launching a competition for engineering offices to carry out projects for uplifting hospitals to the highest level. Elkhosht urges renewing the hospitals and approaching rational governance for hospitals.

Cairo University President said that the new project includes full refurbishment, rational governance and management for hospitals. The Hospital Management Professional Diploma and Masters are mutual between Cairo University and a British University. He said ،،Hospital managers need not be the most successful surgeons in the world simply because surgeons may not know management basics; however, hospital management is conducted through scientific basics.,,

Elkhosht added that Cairo University already started negotiations with a British University to organize a joint degree for Masters and diploma to prepare professional cadres that conduct projects. He pointed out that ،،Hospital management and nursing are the most important two problems that face Egyptian hospitals. There is a nursing project in cooperation between Faculty of Medicine and Faculty of Nursing for establishing a nursing academy for big surgical operations may fail because of the stage following the surgery.,,

Elkhosht said that the logic which governs his stance from religious discourse is the same as the one that governs university hospital. He pointed out that religious discourse cannot be modified and we need a new discourse. We also need new university hospitals management. The project cost is SR 750, 000, 000 including SR 450, 000, 000 Saudi loan and SR 300, 000, 000 to be paid by the Egyptian government represented in Ministry of Investment and International Cooperation which is still a partner in the project equally as all the other sides.

Elkhosht said that Egyptian State is scheduled to pay the loan by 2021 provided that development work is inaugurated after it is finished in 2020. He pointed out that ،،The project is extremely important because it causes a paradigm shift for hospitals in Egypt and enters with it a new age. If the project finished with the planned speed, achievement, and accuracy it will be effective in confronting current problems. This is conducted in cooperation with the Saudi partner through global competition open for all. This is why we are belated in preparation.,,

Cairo University President added that the project includes renewing and qualifying all buildings, equipment, devices, energies, wastes, and advisory committees. It establishes technical cadres and administrative structure. There is another part with regard to Abu-Rish hospitals which Cairo University starts whether at Elmounira by the replacement and renovation of sewage network and the replacement and renovation of Blood Disorders Unit and Interior Unit accommodating 35 beds.


He said ،،All this is to be developed and Abu-Rish Hospital development project will start by developing interior departments, elevators, Heart Department, the fifth floor, and establishing outpatient clinics with the Japanese side. Magnetic Resonance Imaging (MRI) Device will be purchased with EGP 27, 000, 000 to decrease patient suffering and transferring them to new and old Kasr Ainy.,, He pointed out that the executive steps of Japanese International Cooperation Agency (JICA) are belated because of problems with regard to surrounding apartments. He said ،،We work on preserving the district so that we examine the neighboring area and apartments. Top-ranked advisories are to be brought by the final steps of the project to accelerate the steps to start the Japanese project that is based on solving reality problems.,,

Elkhosht said ،،We dream of the project because it is not only a project but also faith. Our existence is related to this project which will be a reason for transformation. We will no longer be deceived by anyone. Political leadership requires achievement report that is to the ground and not just establishing virtual worlds or high reality.,,

Cairo University President announces that the university starts development project within the coming days as well as rehabilitates heritage library which has been a headache library that contains manuscripts and antiquities that need preservation. There were attempts to develop it but partial reform is not a good choice. We should begin with establishment not restoration. This needs some studies before the beginning of development tasks.

Elkhosht pointed out that all the students who will join the international branch for Cairo University will be able among those capable of paying expenses, but their rate will be 50% to finance non-paid programs. He added ،،We are a non-profit institution and free education will be kept intact because it is a right, duty, and a constitutional provision that should be maintained but there are people capable of joining paid programs with free will.,,

He pointed out that today was the first meeting for executive committee for Kasr Ainy development project. He said ،،We hope to deliver most modern global hospitals to Egyptian youth by 2020. Cairo University Administration promise to complete the largest education and health project in the Arab Republic of Egypt.,,

Khodeir added that patients will be treated for free inside Kasr Ainy. He pointed out that Kasr Ainy income is from the state and donations. He said ،،Kasr Ainy will remain free and we need 200 faculties of nursing in Egypt but the new academy provides much to us.,,