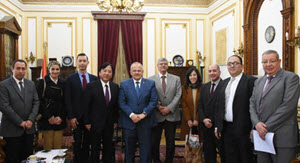 The Japanese Ambassador discusses with Cairo University President means of fostering cooperation between Cairo University and Japanese Universities in the light of Egyptian and Japanese aspirations to supporting and developing relations between the two countries in different fields. He assures the importance of extending cooperation fields to include student and academic exchange and scientific research and training.

Elkhosht added that the meeting tackles cooperation established between Cairo University and Japan in the project of developing and habilitating Abu-Rish Japanese Hospital and Cairo University preparation for training teachers at new Japanese schools in Egypt according to Japanese government programs in this field. The meeting also tackles benefitting from Japanese professors in faculty members skills development courses. Elkhosht assures the importance of enhancing scientific cooperation, exchanged visits of faculty members, and cultural exchange.