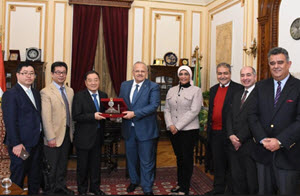 Cairo University President Mohamed Osman Elkhosht meets the Ambassador of China in Cairo Song Aiguo and accompanying delegation at office to discuss fostering means of cooperation between Cairo University and Chinese Universities. The meeting is witnessed by the Manager of Confucius Institute at Cairo University Rehab Mahmoud.

Cairo University President and Chinese Ambassador discuss a number of ideas related to means of development and breaking new ground of cooperation between Cairo University and Chinese Universities in different academic, research, and cultural fields. Egypt and China aspire to support and develop relations between the two countries in different fields including academic and research cooperation, training, and student exchange.

Cairo University President Mohamed Osman Elkhosht said that a number of topics regarding cooperation with Chinese Universities and higher education foundations are discussed in the meeting. He pointed out that political leaderships of both countries are keen on supporting relations with China. He added that the two states have history, ancient civilization, culture, and developed life vision.

Elkhosht added that he has information about ancient Chinese history especially in fifth, sixth, and seventh centuries B.C., Chinese Buddhism, modern and contemporary history, Chinese revolution, and Chinese War against occupation. Egypt was the first state to acknowledge Chinese independence. He pointed out that Chinese experiment with socialism is ideal. It is a different pattern because it managed to update itself and integrate with some capitalist elements. Chinese economic and political experiment, state system, and the nature of authorities with the people presented highly important exemplary model among world countries.

Elkhosht spoke out that he wishes that Confucius Institute at Cairo University becomes expertise of culture, politics, and economy, and a research center for scientific experiences exchange between Egypt and China, in addition to its role in Chinese language teaching.

The Chinese Ambassador acclaims the experience of Cairo University President Mohamed Osman Elkhosht which he described as international experience including suggesting ideas and running the university. He pointed out that his management for the university is developed and modern. The ambassador said that Cairo University is one of the most important universities at world level in all fields. It has a history of cooperation with Chinese Universities especially Beijing University; one of the most important universities in China. Song Aiguo assures that he is concerned with fostering cooperation relations with Cairo University especially with Beijing University and Confucius Institute at Beijing University; an important bridge of cultural cooperation between Egypt and China. He pointed out that Cairo University students usually win first places in competitions organized by China Cultural Center in Cairo. The Chinese Ambassador in Cairo illustrated that Egypt is one of the most important cooperation partners with China. It is the first Arab African state to have relations with China. The Ambassador assures that the visits of Egyptian President Abdel-Fattah Elsisi to China contribute to deepening friendship between the two states.