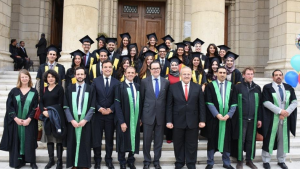 Elkhosht assures in the meeting the aspiration of Cairo University to break new ground for academic cooperation with French Universities. He pointed out that there is already cooperation between the two sides; such as the joint degree between Faculty of Economics and Political Science and Paris University, and Legal Studies Program in French between Faculty of Law and Sorbonne.

The Ambassador of France in Cairo said that he wants to get more information about Cairo University International Branch at 6th of October City and the cooperative potential in international relations context. Stephane Roumtier added that the relation between Egypt and France is an ancient historical relation especially in academic and educational aspects.

Cairo University President and the French Ambassador witness the graduation celebration of seventh class for joint certificate between Paris University and Faculty of Economics and Political Science at Cairo University, with Faculty Dean Mahmoud Elsaid, professors and students attending.