Cairo University Cultural Salon Completes its Activities.. Elkhosht: Lack of Dialog Being One of Most Important Reasons of Wars and Disputes.. Egypt Progresses only by Competent Citizens 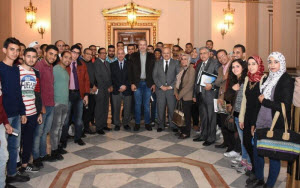 Open dialog is held with the Media Professional Tamer Amin about Media and Phase Challenges at Ahmed Lotfy Elsayed Hall at Cairo University, on Thursday. It is one of the activities of cultural salon for Cairo University.

Cairo University President Mohamed Osman Elkhosht said that the cultural salon of Cairo University is mainly for holding open dialog among students and opinion leaders hosted, not for the assemblage of students or attendees. Elkhosht pointed out that there is a problem in managing diversity, dialog, and difference in a positive way according to rules and assets that govern dialog. He added that the lack of dialog is one of the main reasons of current wars and revolutions at the Middle East. He said that Egypt will become a developed state only by qualified and competent citizens who are able to manage dialog because the progress of any state or society is based on the progress of humans themselves.

Elkhosht added that the difference between Western states and Egypt is that the Western society is capable of managing disagreement and realizing dialog as all have the right to diverse and disagree, however, management and realization are more important. Cairo University seeks enlightening and rehabilitating students to learn how to manage dialog within the framework of Cairo University enlightenment policy through Culture and Enlightenment Council and Document seeking the development of large executive programs at all levels. Holding dialogs with thinkers and opinion leaders is the most important executive program.

Cairo University President said that a great part of crisis management and making starts from media which plays the role of delineating the public opinion trends. He pointed out that terrorism challenge is one of the most important challenges followed by the development challenge because we are all seeking social prosperity. He added that people should have constant principle and avoid the manipulation of orientations and opinions.

Elkhosht calls for participating in the coming presidential elections considering this participation as a patriotic task for everyone lives in Egypt.

The Media Professional Tamer Amin said that Cairo University is a major beacon for science and education in Egypt that has been graduating generations of Egyptian sons and daughters and enlightening and imparting science and culture. Tamer Amin pointed out that mass communicator should be neither leader nor star because mass communication is the media of information and facts between reality and audience. He added that mass communication was a unilateral disarmament throughout the 60 or 70 previous years. It radically changed in the last period and now. A unilateral disarmament dictates upon the spectator through listening only. The most prominent evidence on this is the 1976 defeat when media resorted to lying at the time.

Tamer Amin proceeds that the only advantage in this issue is the evaluation process for we as humans have neither angels nor demons among us, but we have kindness and evil or negativity and positivity within; which means that failure and success cannot be generalized or separated. This differentiates us from the Western society which has the analytical culture we lack being resulted from avoiding treatment in a domain of disagreement, diversity, and multiplicity.

Tamer Amin illustrates that mass communication is two-pronged including opinion and reply at the wake of January 25 Revolution, pointing out that there are 10 main types of talk shows in addition to other types. He pointed out that the programs of those talk shows are inspired by the topics being the talk of the town whether trough social media or real Egyptian street.

Media after June 30 Revolution is based on communication. Egyptian people are source of media material, priorities agenda, and topics, therefore, media is presented in the domain of audience interests and issues. Tamer Amin assures that mass communication played a big role in leading July 30 Revolution to success with 80%.

Tamer Amin illustrates that citizen converted from a person at home into media man/woman through communication via social media; therefore, one should not underestimate his or her posts on accounts, tweets, or hashtags that may result in depressing a soldier or circulating a rumor. Everyone should be responsible for his or her acts. He pointed out that the most important advantage after June 30 Revolution is patriotic advantage that mass communication tries to disseminate especially regarding participation in the coming presidential elections. He assures that the role of mass communication is encouraging citizens to participate in elections. This came as a reply to one of the questions asked by students on the role of media regarding participation in the coming presidential elections.

Tamer Amin pointed out that no great power can fragment Egypt, assuring that sovereignty lies in governance, and control over territory is more important than territory itself. He said that the goal of the Sinai purging process is terminating terrorism. He illustrates that it is the first time since the seventies for Armed Force redeployment to take place in Sinai as a whole.

Tamer Amin illustrates that Cairo University students should feel proud of their space in the beacon of science all over science and education ages. He assures that he responds to the invitation of attending salon for listening more than speaking because students are the future of the homeland.

Cairo University Cultural Salon Completes its Activities.. Elkhosht: Lack of Dialog Being One of Most Important Reasons of Wars and Disputes.. Egypt Progresses only by Competent Citizens - Cairo University