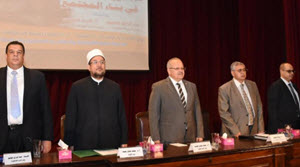 Cairo University President Mohamed Othman Elkhosht said that Egypt today heads speedily at development. It leads a war for achieving development and another war against terrorism and the exterior plots planning for Egypt the same destiny of Syria, Iraq, and Libya. Elkhosht points out that every individual in Egypt should develop him/herself before uplifting Egypt.

Elkhosht addresses attendees saying ،Be the change you wish Egypt could achieve. The state will progress when everyone succeed in his/her discipline.