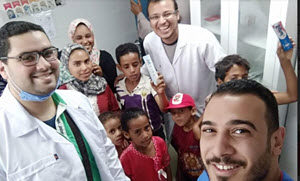 First: Abide by preparing daily schedules for medical and nursing shifts, submit them every day to Cairo University President, and put them on announcements board.

Second: Establish specific system for recording patient cases, follow them up, and supervise them.

Fourth: Investigate with absentees of medical cadres without excuse.

Fifth: Make effective bylaw for penalties and apply them strictly.