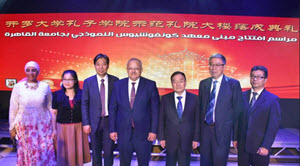 Khaled Abdelghaffar: ،Confucius Institute Being Bridge of Culture Transfer and Exchange between Egypt and China,

Minister of Higher Education and Scientific Research Khaled Abdelghaffar said that Confucius Institute at Cairo University reflects great efforts made by Cairo University as usual to produce such a distinctive edifice with large cost by which Cairo University contributed with Chinese government. This is evidence on peoples culture cooperating at wide scope. Abdelghaffar pointed out that the Spokesman of China said during a meeting with the Egyptian Republican President Abdel-Fattah Elsisi at Alexandria Library that China has become one of the strongest economies in the world and an example throughout the fourteen previous years.

The Minister of Higher Education and Scientific Research pointed out that Confucius Institute works as a channel of cultural transfer and exchange between the two countries as learners number at the institute has reached 2000 students before inaugurating the last building. It is expected that Chinese language learners turnout increases in the future.

Cairo University President Mohamed Othman Elkhosht refers to the importance of Chinese-Egyptian cooperation forum pointing out that Cairo University is pursuing providing joint scientific degrees with Chinese Universities not only in languages but in all scientific fields.