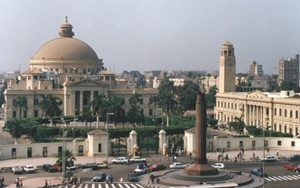 Cairo University President Mohamed Othman Elkhosht points out that U.S. Embassy transference into Al-Quds represents abortion to all settlement discussions. Elkhosht said that Al-Quds will remain the capital of Palestine forever. He added that Cairo University, as an educational and cultural institution and beacon of peace in the Middle-East, denounces the American resolution regarding Al-Quds. Cairo University rejects the resolution and all its consequences.

Cairo University condemns, in a statement, the American Administration proceedings of transferring its embassy to Al-Quds occupied territory despite the wide international rejection for this resolution that parallelizes the seventies anniversary of the Palestinian Dilemma.

Cairo University calls international society for performing its duties towards Al-Quds and Palestine Cause and adopting all peaceful measures to resolve the Palestinian Cause.

Cairo University stresses its support for the Arabism of Al-Quds and its Arabic history. It supports the Palestinian People for restoring their legal rights.