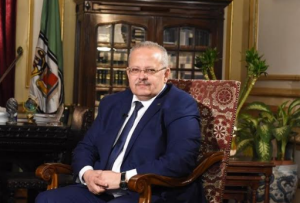 Cairo University President Mohamed Othman Elkhosht is received as a guest to the radio program ،Files on the President Office, presented by the media professional Manal Elaaref on Voice of the Arabs Radio Station. The dialog revolves around files and issues of development at Egypt and Middle East and reforming Egyptian awareness.

Cairo University President Mohamed Othman Elkhosht said during the dialog that reforming Egyptian awareness is crucial because Egypt will not progress by agriculture, industry, and developmental progress only, but the ideas of people should change. He added that a project is launched at Cairo University to change the students methods of thinking and, thus, the methods of thinking of Egyptians because the method of thinking determines everything.