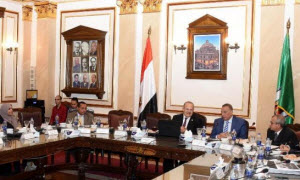 Cairo University Senate urges finishing and announcing all results of second term exams by the end of first week of July 2018 at maximum.

Cairo University Senate approves establishing a special unit that includes qualified technical cadres of university experts aiming at managing several productive projects and companies as a step on third-generation university road. The senate said that a distinctive board of directors will be formed for the unit from related faculties. The senate approves establishing a unit for international ranking that follows Cairo University Vice-President for Postgraduate Studies and Research.