Cairo University: ،Duration of Applying to Competition of Designing Critical Thinking and Entrepreneurship Extended to July 15, 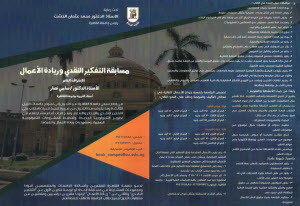 Cairo University President Mohamed Othman Elkhosht announces that the deadline for applying to the competition of designing two curriculum of critical thinking and entrepreneurship is extended to Sunday, July 15, 2018, according to the request of the competition applicants.

Cairo University earlier announced launching a competition between thinkers, university professors, and specialists to participate individually or collectively in preparing or translating two books; the first on critical thinking and the second on entrepreneurship. The two curriculum are going to be study requirements for Cairo University students once during the university study period as graduation requirements starting from the upcoming academic year.