Elkhosht: ،We Need Founding New Egyptian Mind.. We should get rid of Conspiracy and Justification Cultures, 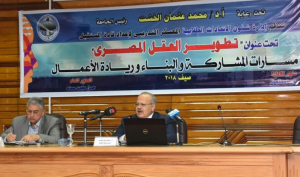 Cairo University President Mohamed Othman Elkhosht said that real renaissance should be based on the development of Egyptian mind which is governed by rational thinking based on manifold things including causative thinking which means that everything has a reason from nature and nothing else.

Elkhosht added during the opening activities of Future Leader Preparation Camp organized by Cairo University for its students under the slogan of ،،Egyptian Mind Development,, that Egyptian mind needs to enter a new age of thinking based on science, reasons pursuance and nature laws respect. He pointed out that states use thinking and respect nature laws achieving progress such as Germany, China, America, Japan, and others. He added that progress cannot achieved by Duaa, but work and action. He said ،،we still pray for victory for hundred years ago and this cannot occur except by pursuing reasons. Allah does not respond to Duaa by speech only but respond to action as happened in October Victory 1973 which resulted from strong strategic study and planning.,,

Elkhosht confirms the inevitability of transforming thinking methods to respecting nature law and pursuing strategic thinking and reasons and moving away from old methods. He said ،،I see that real renaissance takes place to change thinking methods as we are in need to founding new Egyptian mind.,,

Elkhosht: ،We Need Founding New Egyptian Mind.. We should get rid of Conspiracy and Justification Cultures, - Cairo University