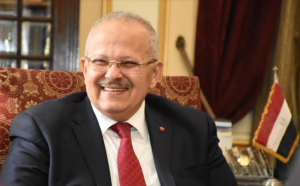 Cairo University President Mohamed Othman Elkhosht said that Cairo University launches a project this summer to develop the Egyptian mind. He pointed out that Egypt has not started a real renaissance since pharos era until present.

Elkhosht said that Egyptians have not enter a real renaissance age because the start was always wrong. He added ،،My point of view and the view of Egyptian Mind Development project is that the real start is changing thinking methods.,,

Cairo University President proceeds that the religious current failed and the reformist current claimed by Mohamed Abduh and Rashid Reda failed also, in addition to the liberal current and the scientific secular current because there is no real transformation.

Elkhosht added that Egyptians are motivated by a group of ideas that determine their behaviors and styles of living as well as the nature of progress in Egypt. He pointed out that many Egyptians think that the universe moves by words and wishes and believe in genies and black magic and they are governed by pessimism and optimism. He said ،،The universe is created according to specific laws which should be respected and used in scientific research, industry, and production. However, most of Egyptians have inclination to believe talks quickly without searching for resources or examining the reality of those talks.,,