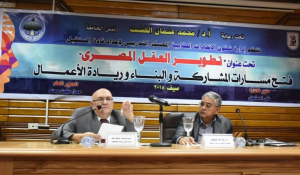 Cairo University continues the activities of Future Leaders Preparation Camp entitled ،،Egyptian Mind Development,, organized by the university in participation with more than 600 students during the period from July 8, 2018, to mid-August 2018. The camp is conducted in the framework of ideological project aimed at Egyptian Mind Development and opening new era based on rationality, scientific thinking and building new society. The activities include a series of meetings attended by a number of public and media figures. The camp includes 6 regiments with 100 students for each regiment in order to graduate 600 students who have the ability to work on changing the thinking methods of their colleagues from mythical superstitious thinking to scientific realistic thinking that considers reasons.

Cairo University hosts Mogahed Khalaf the Editor-in-Chief of Gomhouria Newspaper in a meeting with students entitled ،،Our Youth in Relation to Internet Culture,, with the Cultural Advisor of Cairo University President Abdullah Eltattawy attending the meeting and running the dialog.

Mogahed Khalaf said that Egypt looks forward to releasing itself from the current crisis to stand on solid ground and broaden future horizons. The Editor-in-Chief of Gomhouria Newspaper said that Cairo University prepares itself in this stage to become a center and starting point of directing the Egyptian State to a new policy adopted by Egyptian President Abdel-Fattah Elsisi. President Elsisi enunciates three points to be focused on in the Egyptian State; culture, education and health.