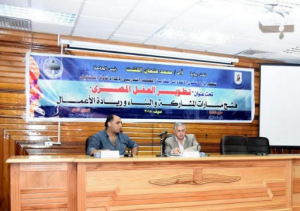 Cairo University continues the activities of Future Leader Preparation Camp entitled Egyptian Mind Development in participation with more than 600 students during the period from July 8, 2018, to mid-August 2018. The camp activities are sponsored by Cairo University President Mohamed Othman Elkhosht in the framework of ideological project aimed at Egyptian mind development and opening a new era based on scientific thinking and establishing a new society. The activities include a series of meetings with number of public figures and media professionals attending. The camp includes 6 regiments with 100 students for each in order to graduate 600 students who have the ability to work on changing the thinking methods of their colleagues from mythical superstitious thinking to scientific realistic thinking that considers reasons.

A series of Future Leader Camp meetings at Conference Hall at Cairo University Hostel witnesses open meeting with the journalist and writer Wael Elsemary the Editor-in-Chief of Youm 7 Newspaper with students to complete the topic of Media Role in Egyptian Mind Development. The meeting is run by the Cultural Advisor of Cairo University President Abdullah Eltattawy.

Wael Elsemary said that Cairo University has a great role in the elevation and development of Egyptian mind as it encompasses prominent scientific mentalities. Elsemary acclaims the historical and transitional role of Cairo University in raising awareness, developing mind, developing talents, boosting creativity, encouraging innovation, and enhancing student leadership skills. Elsemary commends the initiative of Cairo University President Mohamed Othman Elkhosht regarding the development of Egyptian mind towards confronting extremist thoughts, superstitions and myths and building instead a new society based on science, mind, and rational thinking.