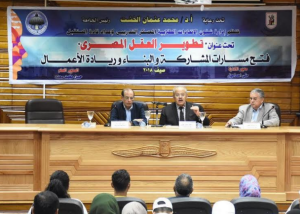 Cairo University President Mohamed Othman Elkhosht said that real change in Egyptian society should begin with changing the methods of thinking to enter a new era of renaissance in Egypt. Real renaissance should be based on Egyptian Mind Development. Elkhosht pointed out that Egypt has witnessed many turning points that no hoped renaissance was actually achieved for many interior and exterior reasons. Elkhosht said that ،،The main reason is that we have not actually answered the From Where We Should Start and To Where We Are Going questions.

The seminar is one of cultural seminars held at Future Leaders Preparation Camp for Cairo University students among the Egyptian Mind Development series in cooperation with the writer and journalist Mohamed Elbarghouthy the Editor-in-Chief of Elwatan Nespaper. The cultural seminar is attended by Abdullah Eltattawy the Cultural Advisor of Cairo University President. Elkhosht said that changing Egyptian mind is the basis of new renaissance. He added that real renaissance is that of Egyptian mind development towards scientific thinking and considering progress principles. He confirmed that Egyptian Mind Development is a crucial issue for building society. Egypt will not progress developmentally except by changing people ideas on bases of seriousness, profoundness, sense of belonging to homeland, value system elevation, law respect, and superstitions and rumors rejection. He said ،،We want to develop Egyptian mind to transform Egypt from place glory to human glory.,,