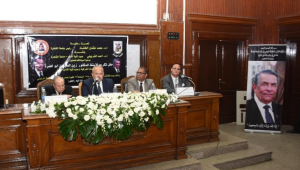 Cairo University President said that Zeinelabidin has been influential with his humanness and great professorship along his life. He used to own a mind that encompasses the whole universe and all people. His soul used to welcome others with different natures. Cairo University President discovered humanity uniqueness in the personality of Zeinelabidin.

Elkhosht pointed out that Zeinelabidin Abukhadra is one of the prominent figures of Faculty of Arts Deanship as he held the Dean post in one of the most critical periods in Egypt and university; January 25 Revolution period which was a crucial event in the history of Egyptian people. It is the period when he proved the constancy of his stance, origin and capability of wise leadership amid stressful circumstances. He is also acclaimed for his wisdom to manage the faculty in this critical period with high efficiency.

Zeinelabidin Abukhadra is a Professor of Hebrew at Oriental Languages Department. He held many posts; including the Trustee of Arts Committee at Supreme Council of Universities, Faculty of Arts Dean Cairo University, previous member at committees of Supreme Council for Culture, member of Board of Directors of Center for Languages and Translation, and member of Arbitration Committees in many scientific and specialized journals.