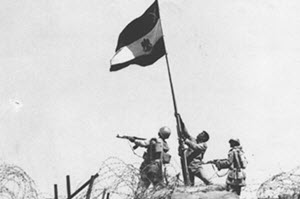 The General Doctor Nasr Mohamed Nasr Salem delivers a lecture entitled ،،The Surrounding Risks in Egypt and Arab World before and after the Victory of October 1973.,, The lecture sheds light on the strategic planning nature of glorified October War and the victories achieved by Egyptian Army being taught at military academies. He also illustrates the factors of success achieved by National Army in restoring homeland and promoting homeland and citizen dignity.

Prof. Dr. Mohamed Othman Elkhosht pointed out that Nearly 50 professors and employees graduated from Cairo University and participated in October War are honored during the celebration. He added that the university is keen on reviving the October Victory anniversary that is considered a pride for every Egyptian as the Egyptian Army managed to restore trust to every Egyptian citizen.