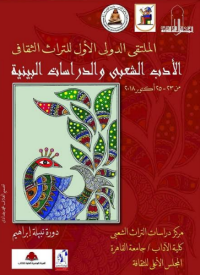 Center for Popular Heritage Studies at Faculty of Arts Cairo University organizes the first international forum for cultural heritage in cooperation with Supreme Council for Culture. The forum is entitled ،،Popular Literature and Interdisciplinary Studies,,. This course is run by Nabila Ibrahim from October 23 to 25, 2018.

Cairo University President Mohamed Othman Elkhosht inaugurates the conference activities at 10 on Tuesday, October 23, 2018, at Conference Hall, Faculty of Arts Cairo University. The activities of the forum are held in exchange between Cairo University and Supreme Council for Culture in participation with many researchers from Egypt and some Arab and Western countries including Algeria, Iraq, Tunisia, France, Jordan, Saudi Arabia, Sweden, Romania, and Lebanon.

The Manager of Center for Popular Heritage Studies Khaled Abuleil said that the scientific sessions, workshops and suggested themes in conference are launched from the correspondence of relations and the overlap between human sciences. He added that the importance of the forum stems from the increasing interest in popular studies in the framework of cultural contexts and their relations to human sciences and other social ones, as well as linking these studies with the cultural identity and mobilizing communities.

The forum is intended to highlight the leading role of Cairo University to promote the means of scientific communication between researchers in human and social science fields, reach out means of cooperation between Egyptian and non-Egyptian researchers, shed light on the most important touristic landmarks, and contribute to refreshment of cultural tourism.