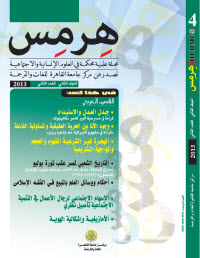 Center for Foreign Languages and Professional Translation – Cairo University has issued the fourth volume of Hermes, professional journal in publishing arbitrated academic research in social sciences and humanities in Arabic and English. This is included in the framework of Cairo Universitys project of scientific and cultural journals which is conducted through Center for foreign Languages and professional Translation, and sponsored by Dr. Gaber Nassar, President of Cairo University. In addition to Hermes, the project also includes the two journals Al-Torgman and Logos. The project aims at boosting scientific and academic publications of Cairo University in social sciences and humanities that represent about 30 % of the universitys scientific publications in different academic sectors.

Dr. Mohamed Othman Al-Khosht, Director of Center for Foreign Languages and Professional Translation – Cairo University, has pointed out that Hermes new version includes important research papers and arbitrated reports of experts and specialists. One of the most prominent research studies that are included in this volume is a study entitled "Illegal Immigration, its history and reasons in Egypt, International Legislation, International Conventions and Egyptian Legislation in this Framework".

The study revealed large flow of Egyptian immigration types, especially to Mediterranean countries, before 1985 when European countries were still in need for more employees from the South. Meanwhile, European countries were in control of the motion of immigrants from South through family gathering channels. That was the first phase of illegal immigration flow to Europe, whereas the second phase started in 1985 and ended in 1995. It was characterized by contradictions related to immigrants and crowding out indigenous people of the country. This phase was characterized by the imminence of international conventions, issued in 1990, dedicated to protect rights of immigrant workers. On the contrary, the third phase, which started in 1995 until the present, took strict security nature which European countries resorted to through new immigration laws and arranging conventions with Southern countries concerning illegal immigrants. Therefore, secret illegal immigration started as a reaction to convention and strict security.