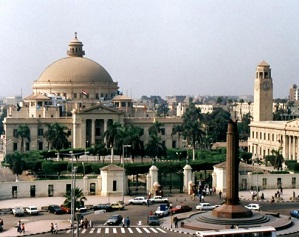 Dr. Gaber Nassar, President of Cairo University, inaugurates an experimental station of solar energy concentrates contracted on which between science and technology fund, Cairo University and researchers of Faculty of Engineering. This was at 11 a.m., Thursday, 2/1, at experimental station that is headquartered in Faculty of Engineering, Cairo University, at Al-Sheikh Zayed, the sixth of October. The inauguration was attended by Dr. Ramzy Estino, Minister of Scientific Research, Dr. Mahmoud Sakr, who is in charge of tasks of President of Scientific Research Academy, Manager of Science and Technology Fund, and elite of ministers, professors, engineers specialized in solar energy field.

The project aims at developing the Egyptian model of concentrated solar energy system which leads to expanding researches related to developing systems and equipment of exploiting renewable energy, especially wind energy and solar energy which are considered the most important energy resources by 2050. The project also aims at fixing problems of research and development of the system components. It is considered a main step that is necessary in founding a basis for local production of units of collecting concentrated solar energy in Egypt.

The research team of the project has presented a complete design of concentrated solar energy congregation. The team has also made a theoretical study of simulation of concentrated solar energy congregation. The study ended with setting a detailed design of the congregation and manufacturing a primary model according to this design. After installing and running the model, experimental studies have been conducted to achieve the congregationperformance under realistic circumstances. The study included specifying the cost and available options of manufacturing.