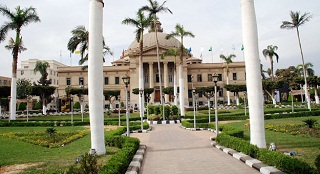 Dr.\ Gaber Nassar, President of Cairo University, has held a meeting with former deans of Faculty of Science over 20 years to study means of faculty development. The meeting has been attended by Dr.\ Mohamed Abdul-Hamid Al-Sharkawy, Dr.\ Ahmed Abu-Khadra, Dr.\ Ahmed Fouad, Dr.\ Ahmed Galal and Dr.\ Hamdy Hasanein. The meeting ended with forming a committee headed by the oldest dean; namely, Dr.\ Mohamed Abdul-Hamid Al-Sharkawy to study the problems which surround the educational and research process at the faculty, suggesting solutions, preparing to workshops of faculty departments.

This paves the way to the international conference to be held before the end of the current year to develop the educational and research process at the faculty, preparing a plan for developing laboratories during two years, and proposing a package of incentives for the top students of General Secondary stage and most distinctive students of scientific departments using a system of scientific nurseries which ensure communication between students and professors to ensure excellence and scientific research with giving them financial rewards.