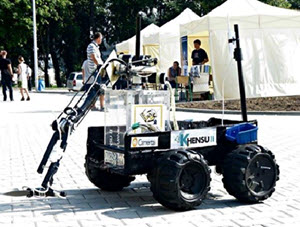 Dr.\ Sherif Murad, Dean of Faculty of Engineering, Cairo University, has announced that a student team from the faculty has achieved the third place for Egypt in an international scientific competition which has been held at Poland in the period between September 5to September 8, 2014. About 24 student teams from universities around the world participated in the competition to design a robot which walks in the space on the surfaces of planets, makes some operations to analyze soil samples, and communicates with space vehicle to make some maintenance operations. He assured that the place which has been achieved by Faculty of Engineering’s student team is considered an achievement in the second international Egyptian participation of this sort after the faculty team achieved the ninth place in a global competition held in the U.S. during April.

Dr.\ Gaber Nassar, President of Cairo University, has expressed his appreciation of Faculty of Engineering’s role in developing skills of students and graduates as well as achieving good results in international scientific participations. Dr.\ Nassar has said that the achievement made by students of Faculty of Engineering is unprecedented and is achieved for the third time. The first time was in an international competition last year for manufacturing energy saving automotive, whereas the second was winning the ninth place in Rover international competition for universities on April at the U.S. for manufacturing an exploratory vehicle which work in the space. He assured that the university boosts its talented students in all fields.