Prof. Dr.\ Gaber Nassar Inaugurates the Activities of the Conference of Egypt and Mediterranean Countries through Ages at Faculty of Archaeology 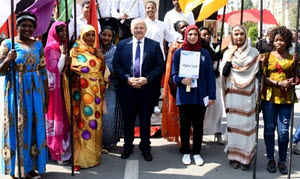 Dr.\ Gaber Nassar, President of Cairo University, has inaugurated the first international conference, entitled “Egypt and Mediterranean Countries through Ages” on Wednesday, October 15. It is organized by Faculty of Archaeology, Cairo University.

The conference has been attended by Dr.\ Ezz-ed-Din Abu-Steit, Vice President of Cairo University for Education and Students Affairs, Dr.\ Mohamed Hamza, Dean of Faculty of Archaeology, elite of former deans and vice deans and a group of researchers, scholars and specialists in archaeology fields. Eight countries have participated in the conference, namely; Tunisia – Morocco -   Syria – Algeria – France – Romania – Hungary – Switzerland, as well as participation of most of the Egyptian universities. Number of the presented researches in the conference is 90 researches.


At the beginning of his speech, Nassar welcomed all participants in the conference, guests, and attendees, expressing his great pleasure to organize this conference which is considered a crucial point in discussing Egypt’s history and civilization and its relationship with Mediterranean countries, pointing out that the countries that are surrounded by rivers where special civilizations emerged have scientific, cultural and civilized history. He has also referred to the leadership of Cairo University and Faculty of Archaeology in fields of scientific and archaeological researches. He expressed his aspiration to extend the university’s achievements to outside its walls.

Nassar stressed the necessity of caring for the field of archaeology, and that the university will always be supportive to Faculty of Archaeology and all units of the university. It will also be supportive to all its scientists and scholars. In the opening, Nassar has announced allocating five monetary prizes to the best five researches in the conference; the first prize 10000 EGP, the second 8000 EGP, the third 7000 EGP, the fourth 5000 EGP, and the fifth one 3000 EGP.

Prof. Dr.\ Gaber Nassar Inaugurates the Activities of the Conference of Egypt and Mediterranean Countries through Ages at Faculty of Archaeology - Cairo University