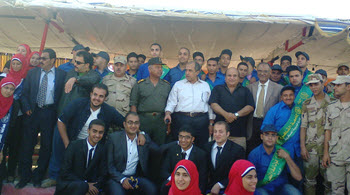 Sponsored by Dr.\ Ezz-el-Din Abu-Steit, Vice President of Cairo University to Education and Students Affairs, has organized a visit to New Suez Canal Project on Tuesday, October 28, 2014. The delegation has included about 100 university students, some staff members, manager of military education at Cairo University, as well as employees at Youth Care Administration.

Abu-Steit has declared that the visit aims at getting students introduced to the most important main information about New Suez Canal Project, the extent of the benefit which will be achieved after operating the canal, and how students can contribute directly in promoting our Homeland.

Kamel Al-Wazir, The Major General Staff, Vice President of the Engineering Authority at the Armed Forces and the General Supervisor of the Project, has delivered a lecture about the project for students. He has also conducted an open dialogue with them to answer all the questions that may address the minds of students.