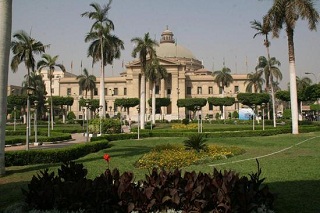 Two ladies from Cairo University professors have won Arab Women Award in Science and Technology for the sake of development for year 2014. They are Dr.\ Mona Mustafa Mohamed Amin, Professor of Faculty of Science, and Dr.\ Randa Mohamed Abdul-Karim, Professor of Faculty of Engineering. Arab Women Organization has announced three Arab winning ladies among whom two Egyptian ladies were from Cairo University Professors. Award Arbitration Committee has seen a noticeable distinctiveness in their overall scientific production since the beginning of year 2009. Arab Women Award will receive them in the ceremony of official announcement of the winners’ names through holding executive council meeting in the coming October   when the ceremony of awarding the winners will be held. The two winners have received a letter of their winning from Ambassador Mervat Al-Talawy, the General Manager of the organization.

Dr.\ Mona Mustafa, Professor of Faculty of Science, Cairo University, has managed to reach universality with her scientific research about fighting against breast cancer. The American Foreign Ministry has deemed her among the most prominent 10 women in the world for year 2012. Her name and nationality were placed in famous women in science list, at the American Foreign Minister, concerning Middle East and North of Africa region. This is because of her pioneering researches in the field of breast cancer inflammations. Dr.\ Mona has succeeded in establishing the most modern cancer biology research laboratory in the Faculty of Science, Cairo University, through Cairo University’s support and the universal Breast Cancer Campaign, aiming at conducting accurate genetic and proteinic specification for breast cancer.

Dr.\ Randa Mohamed Abdul-Karim is a Professor of Metals, Faculty of Engineering, Cairo University, and Manager of Engineering Center for Archaeology and Environment, Faculty of Engineering. She received her PhD. degree in metal engineering from Aachen University in 1994. She has presented more than 40 research in international periodicals and journals in the field of metal corrosion and protecting it, and using nanotechnology in surface treatment. She has also won Excellence Award from Cairo University in 2008, and Cairo University awards for international publishing for years 2008 – 2012. The President of the Republic has selected her member of the first Egyptian Specialized Council for Education and Scientific Research, which is subordinate to the Presidency of the Republic of Egypt.