Cairo University Hosts the Grand Mufti in its Cultural Season 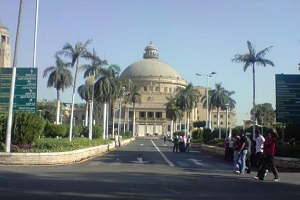 Dr.\ Shawky Allam, Grand Mufti of Egypt, will speak, in the first meeting of Cairo University’s cultural season of year 2014/2015, about correct religiosity. This will be in a seminar, entitled “Correct Religiosity: Concept and Practice”, held at 5 p.m., on Monday, November 24, 2014, at Grand Celebration Hall, Cairo University.

Grand Mufti, Dr.\ Shawky Allam, has much research, such as; the role of state in zakah, laws of council choice (comparative study), guardianship in marriage contract (comparative study), Sunni and heterodox divorce (fact and provision). He also has 25 books on the political rights of Muslim women (comparative study between Fiqh and law), Fiqh rules and its role in judicial interpretation of contract at contention in its vocalization, women and globalization in Arabian Peninsula, and Muslim women in modern age. He was selected by “Jeune Afrique”, French magazine, as one of the most influential 15 African Hierarchs in the Dark Continent.