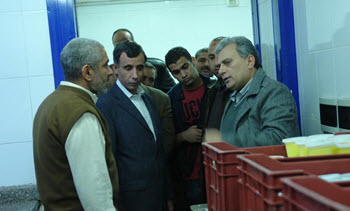 Professor Gaber Nassar, President of Cairo University, has confirmed that the university is keen on agricultural education as well as developing the potentials of Faculty of Agriculture – Cairo University which is considered one of the oldest and most notable university faculties. This has been reached through fine and modern education for students using new technology means aiming at preparing distinctive graduates who are capable of competition at labor market in the light of current and future developments of interior and exterior labor markets. He pointed out that the graduates of Faculty of Agriculture should have professionalism and worthiness that can enable them of dealing with technology updates and changes of economy markets. This came while attending the celebration that Faculty of Agriculture – Cairo University held on the occasion of launching the project of students and graduates skills development and rehabilitation of free labor market. This project will be created in cooperation with a number of companies operating in the fields of agriculture and livestock in Egypt. Distributing 80 cages of rabbits for more than 50 graduates of the faculty was the first task made by the project. Nassar has made a tour in the faculty inspecting its production units, including dairy and bakery units and production workshops. He was accompanied by Professor Hany Ash-Shimy, Dean of the Faculty, and some professors. Nassar pointed out the importance of the societal role of Faculty of Agriculture done through its research centers and production units. He confirmed the importance of its role in projects which serve the community and environment, pointing out that the university carries out developmental role besides its educational role, thus, it contributes to community development.


Professor Hany Ash-Shimy, Dean of Faculty of Agriculture, has said that the submission of cages of rabbits to graduates represents the first step in the project of students and graduates skills development and rehabilitation of free labor market, in which the faculty cooperates with a number of bodies and companies operating in the fields of agriculture and livestock. He added that the faculty seeks developing the cooperation with the Ministry of Agriculture, The Agricultural Research Center, agricultural companies and Civil Society Institutions for promoting the agricultural system in Egypt, training youth and faculty graduates and rehabilitating them for labor market, besides, the faculty cares about establishing programs for training faculty students in agricultural technology and developing production units of the faculty for community service.