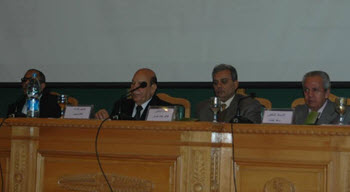 A national conference, entitled “Developing the Egyptian Countryside in a New Institutional Context: Between Reality and Aspiration”, has been inaugurated by Professor Gaber Nassar, Cairo University President, on February 23, 2015. It is held at Library and Information Center, Center for Rural Development Researches and Studies (CRDRS), Faculty of Agriculture, Cairo University.

The conference is attended by Maj. Gen.\ Adel Labib, Minister of Local Development, Dr.\ Saad Nassar, a Representative of Dr.\ Adel El-Beltagy, Minister of Agriculture and Landa Reclamation, Dr.\ Gaber Nssar, President of Cairo University, as well as a group of brilliant scientists of agriculture and representatives of the civil society.

Local Development Minister has said, in a speech he delivered during the conference, that the agricultural development is the basis of Egypt, and that the government has started demarcating the borders through increasing the area of some governorates and decreasing others for the sake of the re-distribution of population density and repartition of resources and wealth among governorates.

He proceeded to say that a map is being set to illustrate population distribution at the level of Egypt. He has also said that the countryside has two parts; South and North, and that the Northern part of most of the governorates is closed, thus, a study should be conducted for benefiting from the new lands; million acres at the first step. Besides, universities, major researchers and scientists have joined a project for exploiting these lands.

Maj. Gen.\ Adel Labib has added that the countryside problem is entangled, thus, making projects inside each village, implementing decentralization, and engaging the civil society for unscrambling tangles are being considered. He emphasized that the government will break the routine so as not to stand as an obstacle before youth.

Nassar has confirmed that caring about countryside is a must, not through specifying problems or talking about them, but through setting a map for rescuing the Egyptian countryside. He added that the modality of changing consumption, production and thinking stereotypes of the Egyptian rural people.

Nassar proceeded to say that this is a sort of a change in the consumption stereotypes that made the countryside looks like a burden over the state's and society's shoulders instead of being a productive resource. He added that disdaining the agricultural careers has been firmly established in the minds of the intellectuals, the matter that lead to the escape of youth generations from working in agricultural production, despite the religious and historical culture that raises the value of this kind of work, and regards it as a productive one.

Nassar has also said that we should care about agriculture and reinforce in minds that Egypt is an agricultural country and will not be an industrial one unless it becomes agricultural in the first place. The agricultural crops have become a strategic weapon used in peace and war nowadays.