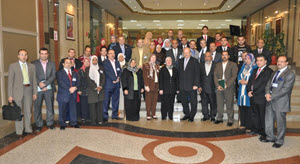 The International Committee for Quality Review has recommended donating ISO 9001/2008 for The New Central Library – Cairo University on March 8, 2015.

Dr.\ Amany Refaat, The Director of the Library, has declared that the Central Library is the first academic library to get ISO certificate in Egypt and the Middle East. She confirmed that the library is considered one of the strongest academic libraries at the level of the whole Middle East, pointing out that the library provides the best librarian and knowledge services using the most recent modern means of technology.

Refaat pointed out that the library is keen on developing its performance and promoting the level of its services for the sake of students and researchers in different educational levels. She illustrated that the library always participates in awareness programs, cultural and artistic activities for raising and enhancing the intellectual level of the users.