Cairo University Witnesses Honoring Ideal Mothers from Inside and Outside Egypt 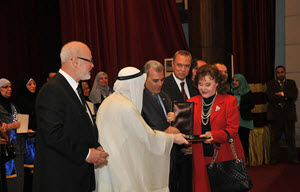 A number of ideal mothers were honored during the ceremony, they are from five countries, namely; Egypt represented by Prof. Dr.\ Hala Al-Said, Dean of Faculty of Economics and Political Science, Germany represented by Hannah Hartman, Lebanon represented by Fadia Shatila Hidar, Morocco represented by Maryam Saleh, President of the General Confederation of Moroccan Construction, and Palestine represented by a delegation from Dar Al-Tifel Al-Arabi which was founded by Hend Al-Husseiny at Palestine.

A number of ideal mothers from several Egyptian governorates were also honored. They are from governorates, such as; Cairo, Gharbia, Menoufia, Minia, Sharkia, Damietta, Dakahlia, Port Said, Beheira, and Qena. Some public figures were also honored, such as; Laila Taher, an actress, Dr.\ Zeinab Bakry, Dr.\ Maggy El-Halawany, Forrmer Dean of Faculty of Mass Communication, Cairo University. Governors of Beheira, Damietta and Qena were honored as well as Deputy Governors of Minia and Sharkia.

In his opening speech, Nassar has confirmed that mother equals the whole society, and not its half as it is said. He pointed out the role of woman and mother in upbringing, educating, and fixing principles, values and manners in their sons’ minds. He referred to her role and high position in the society’s righteousness and her self-denial for the sake of her sons’ happiness. He concluded his speech thanking every Egyptian woman, asking Allah Almighty to keep their health and wellness, finally, thanking all who contributed to this activity.