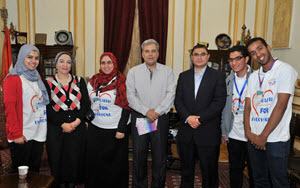 On Tuesday, April 14, 2015, at 11 a.m., “Check Your Blood Pressure” Campaign has been commenced at the dome building, Cairo University. The campaign has inaugurated its inspection tour with visiting the office of Prof. Dr.\ Gaber Nassar, President of Cairo University, offices of vice presidents and the secretary general in the presence of Dr.\ Haitham Soliman, Cardiology Teacher at Faculty of Medicine, Cairo University, and Dr.\ Hala Salah, Vice Dean of Faculty of Medicine for Education and Students Affairs.

The inspection tour has been conducted by a number of Faculty of Medicine’s students who are members of Student Association for High Blood Pressure, under the supervision of Dr.\ Soliman Gharib. They visited the administrative offices at the dome building and checked the managers’ blood pressure. They also distributed among them brochures that aim at raising the awareness concerning this disease.

The campaign’s students have declared that their inspection tour at the dome building will continue to 3 p.m., after that they will visit the faculties to complete their mission of spreading awareness among employees and academic staff. They confirmed that their campaign will be over 10 days starting by April 14 up to April 23.