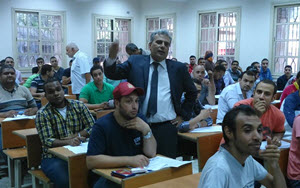 In the framework of the tours of following-up the examination process at Cairo University faculties of academic year 2014/2015, Prof. Dr.\ Gaber Nassar, President of Cairo University, inspected second term final examinations work conducted to students of both Faculties of Dar El-Ulum and Commerce on Sunday, May 31, 2015, with the company of the deans of the two faculties.

Nassar spoke with the students who performed the examinations, assuring them that Cairo University follows-up any immediate complaint related to examinations.

Nassar confirmed the quick announcement of student results. He asserted providing all means of comfort to students in examination halls, good conduct of students, and investigating in cheating cases immediately.

An atmosphere of quietness and schedule has prevailed final exams of Cairo University faculties without witnessing any negative phenomena, except some individual cheating cases between students mostly committed through abstracts, and there is no cheating cases by cell phones after the university took the decision of banning its entry into examination halls.