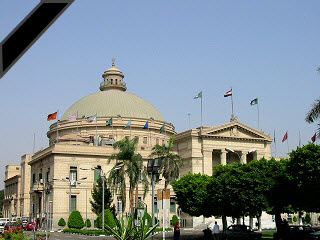 Headed by Prof. Dr. Gaber Nassar, President of Cairo University, Cairo University Council announces the death of the martyr Hisham Barakat, Egypt Chief Prosecutor, who was assassinated because of the treacherous terrorist attack which targeted his motorcade on Monday morning.

Cairo University Council said in its council: "Cairo University offers sincere condolences to the Egyptian People on the martyrdom of Hisham Barakat, Egypt Chief Prosecutor and Attorney-General. It, however, trust the ability of Egypt and its people to face those terrorist abject attacks.

Cairo University confirms that abject terrorism will never undermine Egypt determination that it will continue establishment and development. Cairo University also support all the procedures adopted by the state to confront these criminals. It calls upon the Egyptian People to be aligned as one in confronting abject terrorism. May Allah (SWT) bestow His Mercy upon the deceased, and protect Egypt and its People".