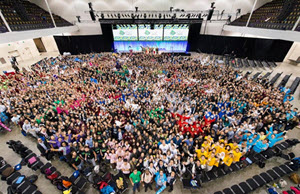 A student team from Cairo University and Ain Shams University wins the bronze medal and third place in the first student participation of Egypt in International Genetically Engineered Machine (IGEM) competition. Nassar has pointed out that the student team which participated in the global competition was equal to the team of The Massachusetts Institute of Technology (MIT), at the United States, the organizer of the competition which seeks education, competition and participation among students teams from around the world.