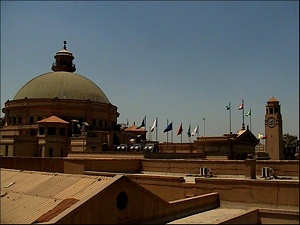 Faculty of Arts, Cairo University, organizes the second seminar of arts dialogues in the academic year 2015/2016, sponsored by Prof. Dr. Moataz Sayed Abdullah, Faculty Dean, and entitled "Theatre between Old and Modern". The seminar discusses the dramatic theatrical works anciently and recently and its development over time, making a comparison between the old era when dramatic art emerged and the modern age when we are living, and how this theatrical art developed over ages and remained effective to communities over 3,000 years approximately without cease. The seminar also tackles a range of plays that are considered a milestone in theatrical creativity anciently and recently, as well as the theatre audience and critics and the critical movement that emerged as a result to the popularity of the theatrical works and its contribution to enlightening and educating the masses.