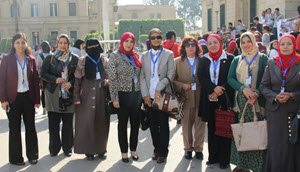 Cairo University organizes a cultural competition for its students in the academic year 2015/2016. The competition is entitled (Read .. Think .. Win), and is sponsored by Prof. Dr. Gaber Nassar, the President of Cairo University. According to Nassar, the competition aims at activating the enlightening role of the university among students by encouraging them to read with thinking and analyzing whether by presenting their points of view on the books they read or by presenting a summary of it.

The competition is concerned with the university selecting, by the assistance of specialists, a group of literary, cultural or political writings, which students read, think of, and present their points of view on their topics whether with agreement or disagreement. Each competitor is required to make a presentation or summary on the book he/she read in front of the arbitration committee, which consists of specialists. Cairo University planned to allocate 50, 000 EGPs as an award for the winners of the competition, as well as prizes in kind.