Prof. Dr. Gaber Nassar Makes a Surprise Visit to the Female Students Hostel at Giza and Holds an Open Dialog with the Students 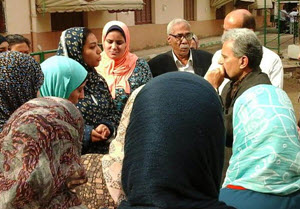 Prof. Dr. Gaber Nassar, Cairo University President, made a surprise visit yesterday on Saturday, afternoon, to the Female Students Hostel, at Giza, where he inspected the residential buildings and dining room where female student were eating lunch. Nassar listened to their complaints and asked them about the meals presented to them at the hostel as well as the amount of food. Some students requested the increase of vegetables, macaroni and rice in the dinner meal.

During his tour, Nassar met the female employees at the hostel and urged them to treat the students nicely, offer them services and work on the hygiene of the buildings continually. A number of the tenth building students insisted that Prof. Dr. Gaber Nassar enters and drink tea with them, which happened. Most of the present students were from Faculty of Dar El-Uum. Nassar held an open dialog with them in the presence of a great number of the students of the tenth building which exists at the hostel entrance.

The dialog was on some problems posed by the students, including solving the problem of the night supervision, reducing the fees of accommodation and subsistence at the hostel in relation to the students whom the geographic domain condition is not implemented. Prof. Dr. Gaber Nassar replied that the fees have already been reduced for some students due to social circumstances or the nature of their fathers jobs. Nassar agreed on reducing the fees of two cases from the present students at rate of 50 – 75 %. The students commended the hygiene of the buildings.

Cairo University President talked in many topics related to the students affairs, confirming to them that the deans of Faculties are ready to meet them and deal with any complaint related to them or their male colleagues. During talking with the female students, Nassar actually called the dean of Faculty of Dar El-Ulum, informing him with the problem of study books, and the dean confirmed that the problem will be fixed immediately.

Nassar confirmed to the director of the hostel, female students, and the supervisors of the hostel that fixing any problem posed by a student is necessary. He said to the students that his office is open for them to pose any problem, confirming that he follows-up the problems of both male and female students, and he speaks with the deans and vice deans of faculties regarding their affairs. He asserted that the university is safe for all students and it works better than the previous years, pointing out that he works on enhancing the educational process and serving students.

The university president invited the students of the hostel to attend the activities of the cultural season, participate in it, and communicate with the staff members of their faculties. Noteworthy, Cairo University President made a tour on the previous day at the male student hostel and held an open dialog with the students.

Prof. Dr. Gaber Nassar Makes a Surprise Visit to the Female Students Hostel at Giza and Holds an Open Dialog with the Students - Cairo University