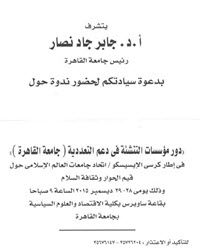 ISESCO - the Federation of the Universities of the Islamic World (FUIW) – Cairo University holds the second seminar, entitled ,The Role of Educational Institutions in Supporting Multilateralism,, on dialog values and peace culture, under the auspices of Prof. Dr. Gaber Nassar, Cairo University President. It is going to be held on Monday-Tuesday, 28-29 December, 2015, at 9 a.m., at Sawiris Hall – Faculty of Economics and Political Science.

A group of senior specialized professors of different fields from inside and outside Cairo University, Islamic and Christian institutions, are going to participate in the seminar.

Prof. Dr. Horeya Mogahed, ISESCO Coordinator at Cairo University, confirmed that societies in Islamic and Arab countries witness a remarkable increase in the acts of violence and societal polarization which threaten society coherence and government stability.

Prof. Dr. Horeya added that moving towards focusing on the concept of (me and others) instead of (me and us) in the framework of multilateralism, the basis of a state, requires stressing mutual coexistence and social tolerance values. This raises the questions on the role of educational institutions and the extent of their continuity and change in their role with globalization influence, as well as how educational institutions seek activating their role in facing rapid changes.