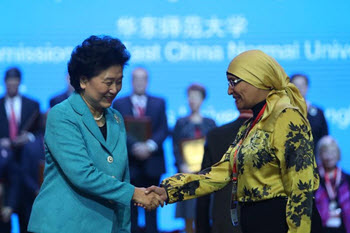 Prof. Dr. Gaber Nassar, Cairo University President, commended her won of the award during his meeting with her at his office. He confirmed the importance of strengthening the educational, research and cultural cooperation with Chinese scientific and cultural institutions and universities. Noteworthy, Confucius Institute – Cairo University was established in 2007 in accordance with the agreement between Cairo University, National Chinese Council and Peking University for spreading and teaching the Chinese language among the Egyptian youth. Cairo University is the main center for the institute in Egypt and the third in the African continent. Since its establishment in Egypt, more than 4000 scholars graduated from the institute by passing the training courses. A number of students traveled to China to learn about the Chinese culture as well.