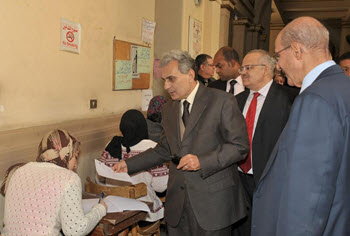 On January 10, 2015, Prof. Dr. Gaber Nassar, Cairo University President, made a tour to inspect the work progress of first term exams at the university campus faculties, including Faculty of Arts and Exam Hall Compound.

During his tour, accompanied by Prof. Dr. Mohamed Osman El-Khosht, Cairo University Vice President for Education and Students Affairs, Nassar was reassured that exam halls are equipped, students are provided with means of comfort, and special halls are prepared for students with special needs and the blind. Cairo University President talked with the students who were performing exam at Faculty of Arts and Exam Hall Compound. He confirmed to them that the university administration follows-up any immediate complaint related to exams. Nassar made sure the professors are present during exams, and stressed to them the importance of the fast exchange of student answer sheets among correctors to announce results consecutively at faculties.

On the fringe of his tour of exam work progress inspection, Prof. Dr. Gaber Nassar said that teaching by study sheets is going to be ultimately banned at the university faculties starting by the next year, provided that the faculty departments determine referential books for students.

First term exams at Cairo University witnessed absolute serenity and no acts that may hinder their progress occurred, and exams are regular at all faculties after all controls of them were provided.

In the same context, Cairo University Vice President for Education and Student Affairs, Prof. Dr. Mohamed Osman El-Khosht, illustrated that the last report of first term exam work progress at Cairo University faculties, in its third week, showed that there is a regression in cheat cases in comparison with the previous periods. This is resulted from activating the penalties of cheating and cheat attempts approved by the university council, reaching a whole year of deprivation from exam. Cheat cases until now reached about 152 individual cases without affecting exam progress, the highest number of which was at Faculty of Law 72 cases, Faculty of Arts 27 cases, Faculty of Dar El-Ulum 21 cases, and Faculty of Commerce 14 cases.