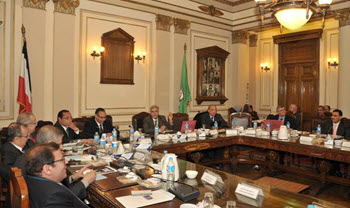 Cairo University Council held their meeting on Saturday, 23/1/2016, headed by Prof. Dr. Gaber Nassar, Cairo University President. The council meeting was commenced with observing a minute of silence in tribute to the memory of the soul of Egyptian martyrs, namely; policemen, army men, and citizens who were victimized because of terrorist acts.

Cairo University Council reviewed a report on the general rules, criteria, and the procedures of developing the university books for students and preventing selling study sheets. The council was prepared by a committee from Education and Student Affairs Council – Cairo University, headed by Prof. Dr. Mohamed Osman El-Khosht, Cairo University Vice-President for Education and Student Affairs. The committee included a group of suggestions, most prominent of which are the adherence of faculties and scientific departments by developing scientific material to keep abreast of the scientific development in various specialties and be consistent with the accredited course specification. Besides, identifying lists of references to encourage students to search read and discuss plus the importance of the availability of those references at the libraries of faculties or the university, provided that the departments are the relying party for any curricula. The suggestions included forbidding any staff member at any faculty to exceed the prices estimated by the university, and not forcing students to purchase books and study sheets in any form, or selling books, curricula or study sheets outside the university campus. The committee of suggestions included also forbidding teaching by study sheets or summaries starting by the next academic year. Besides, accrediting referential curricula specified by the scientific department which forms scientific revision committees for the university books suggested to be taught before the beginning of each term sufficiently in advance. The committee referred in its report to the importance of developing exam systems in a way that prevent the reliance of students on summaries or study sheets. The committee also stressed guarding forbidding the entrance of any study sheets with any individual to the university campus by the university security.

Cairo University Council approved these recommendations and confirmed the importance of activating the means through which scientific departments develop their tasks in curricula specification and providing references. Besides developing exam systems which depends on measuring student ability to grasp, as well as presenting package of stimulants for staff members for the sake of generalizing teaching to references and developing exam systems and evaluation.

Cairo University Council confirmed not exceeding the university books prices. The council commended the measurements adopted by Faculty of Dar El-Ulum to develop an exam system that depends on question bank to be corrected by computer. The council also confirmed that the change of exam systems is a real confrontation with the problem of study sheets.

Cairo University Council reviewed the conclusion of the report of the university legal investigator regarding Prof. Dr. Aziza Mahrous, Dean of Faculty of Veterinary Medicine, and the conclusions reached by the investigations with referral to a Disciplinary Committee and Prosecution. The council approved the dismissal of the dean from her post in application of article no. (43), for year 2014, amended in Organization Law of Universities.

Cairo University Council discussed a report on the performance of Kasr El-Ainy Hospital, and commended the efforts conducted to develop the performance of the hospital managerially, financially and therapeutically. The council expressed their appreciation of sister Kingdom of Saudi Arabia and the Custodian of the Two Holy Mosques for contributing to the development of old Kasr El-Ainy.

Cairo University Council reviewed what was done of the preparations of restoring Cairo University Clock to its previous state. This included polishing its bells and restoring its normal color and illumination, as well as establishing a museum for it. The council also reviewed the project study of Faculty of Engineering regarding establishing optical network for linking the university campus clock with other clocks that were striking with it at the same time like Kasr Al Ainy Clock. 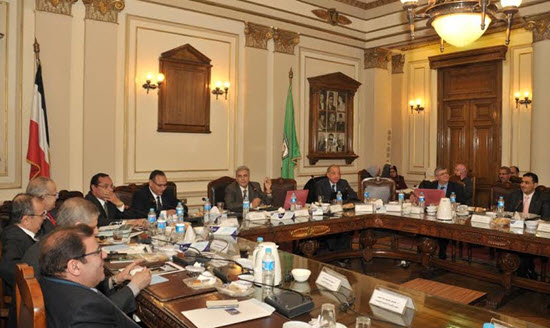