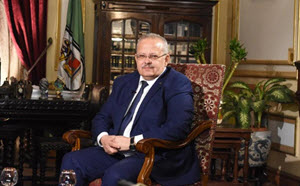 Prof. Dr. Mohamed Osman El-Khosht, Cairo University Vice-President for Education and Student Affairs, confirmed the importance of the consolidation of efforts. This aims at the coordination among Egyptian, Arab and international institutions so as to pose a futuristic vision for facing terrorism and extremism. He pointed out the importance of experience transfer between Arab states and Western states, and bringing Arab national cultures together. He also called for a global Arab dialog on means of combating terrorism.

This came during his participation in the activities of International Youth Conference on Counter-Terrorism, at Sharm El-sheikh, which was held by Ministry of Youth in cooperation with League of Arab States, from February 20 to February 27, 2016. Youth delegates from 22 Arab and International states have participated in the conference.

El-Khost called for dismantling religious discourse as well as dismantling closed mind, the mentality of copying, human intransigent thinking, and the thinking that is hiding behind false religion, so as to expose it in front of itself and the world as well. He also noted that the dismantling process is not for the sake of religion, but for closed mental structure and human religious thinking which emerged on ،،Divine Religion,,. El-Khosht also confirmed the importance of redeeming Islam from social legacies and ،،Heritage Bottom,, . He presented a group of ،،short-term and medium-term solutions,, that encompassed education, media, culture, economy, society and politics for ،، Mind Industry,,  of mentalities that are opened to humanity in the light of Quran and Sunnah. Additionally, there should be reference change, new Feqh foundation, new interpretation, new Hadith science, and the displacement of "illusionary references" that were formed in ،،Heritage Bottom,,  not made for our age.