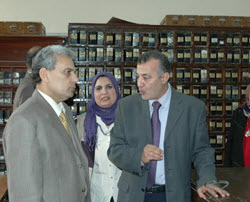 Prof. Dr. Gaber Nassar, Cairo University President, announced that about 35 million EGPs were earmarked for implementing the project of restoring and rehabilitating Heritage Library building (Cairo University Old Library). Preparing databases and the executive drawings of designing and architectural development work that include coordinating public location, constructing works, electric networks, power, alarming system, fire control system, international information network, and foundation work were finished. Nassar added that bidding between specialized companies is to be launched over two weeks to start implementing construction and restoration works, as well as finishing the project within a year and half. All of this is targeting achieving the highest level by the library to compete global libraries, as the library contains rare heritage treasures in all languages. Nassar pointed out that the concern in Cairo University Old Heritage Library is important because it encompasses books, encyclopedias, and rare manuscripts not only in Egypt but also at the global level. He said that Heritage Library is going to be provided with a laboratory for the restoration of old manuscripts that should be maintained for posterity.

Cairo University declared finishing the studies of Old Library (Heritage Library) restoration and development project. These studies are prepared by specialized professors at Monuments Maintenance Center, archaeological and historical buildings, at Faculty of Archaeology, Architecture Department, and Engineering Center for Archaeology and Environment, at Faculty of Engineering, and Libraries Administration. All the measurements of restoration and development works have finished; including architectural development at the old library with maintaining the historical and archaeological value of the building, and creating technology development means of presentation.

Nassar clarified that the old library contains many collectibles and thousands of Arabic and English titles, as well as about 10, 000 books in Oriental languages like Turkish, Persian, Urdu and Ethiopian, and a large number of rare manuscripts. He pointed out that the old library represents academic heritage in terms of architectural heritage and the amount of unique collectibles.